We are home and slowly adjusting back to Christmas time and reality after our five days in gorgeous Zihuatenejo, Mexico.  This was our view all of last Friday, Saturday, and Sunday and yes, I still have sea legs.  Everything was gorgeous and perfect; the hotel, the town, the sea, the fish, and the micheladas :)  I can’t wait to share pictures of our trip with you guys as soon as I can round them all up! 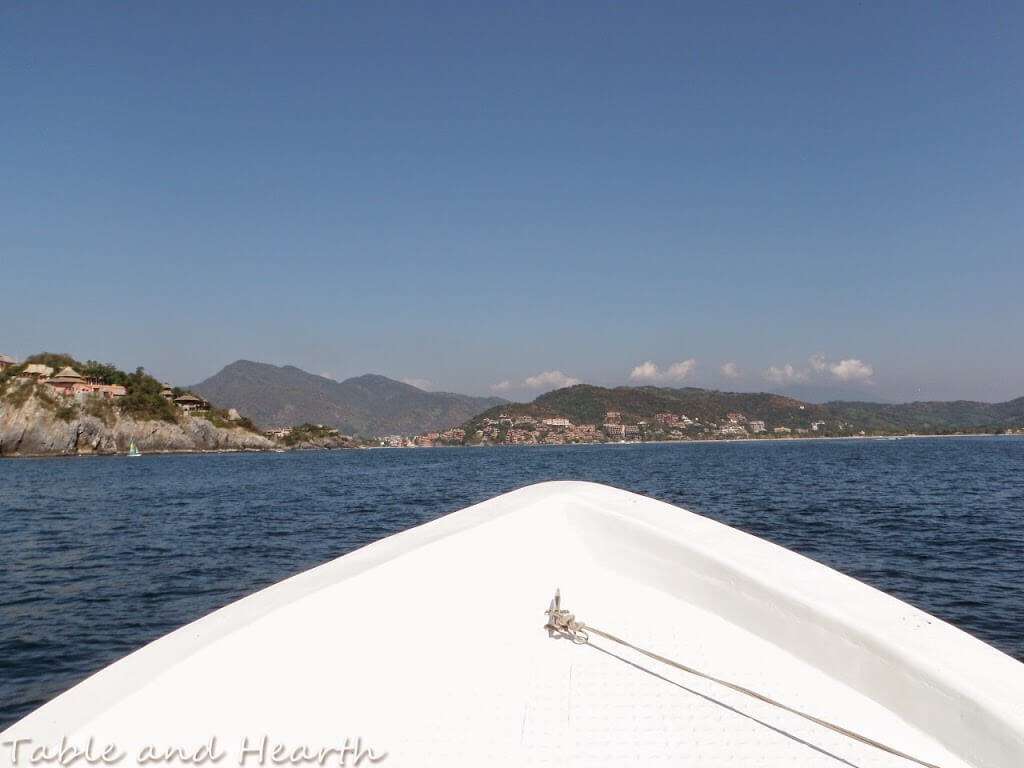 Today I have a couple of recipes we tried a few weeks ago that were immediately moved to the top of the husband’s “list”.  One is super quick and easy, the other a little more labor-intensive, but both are amazing and pair so well with each other.  It was worth all of it.
First up is Liz’s extra beefy meatloaf at Love Grows Wild.  Her secret ingredient? A1 steak sauce!
\ 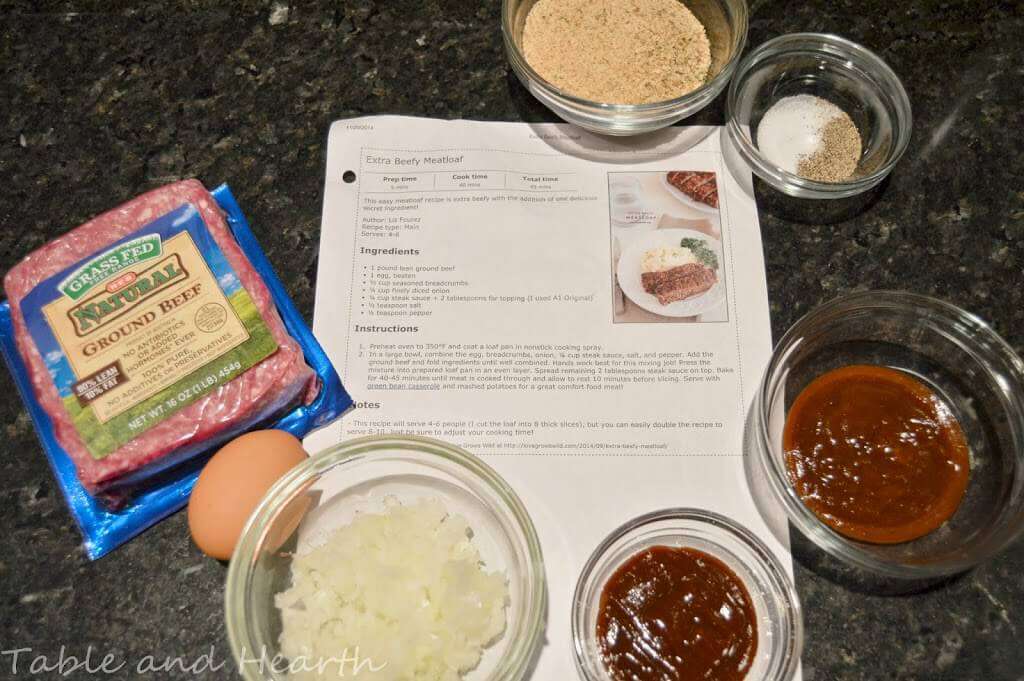 I’ve always known two rules for mixing meatloaf or meatballs: mix with your hands not a utensil, and don’t squish it between your fingers, fold it like a dough and don’t work it too much.  The utensil thing I don’t know, I’ve always used my hands but the working/squishing thing seems true to me.  I heavily squished some once and those were the driest meatballs ever, major fail.  So fold by hand until it’s all combined, then stop.  For these, there’s only seven ingredients and two steps, mixing and baking.  The prep takes like five minutes, perfect for a quick dinner! 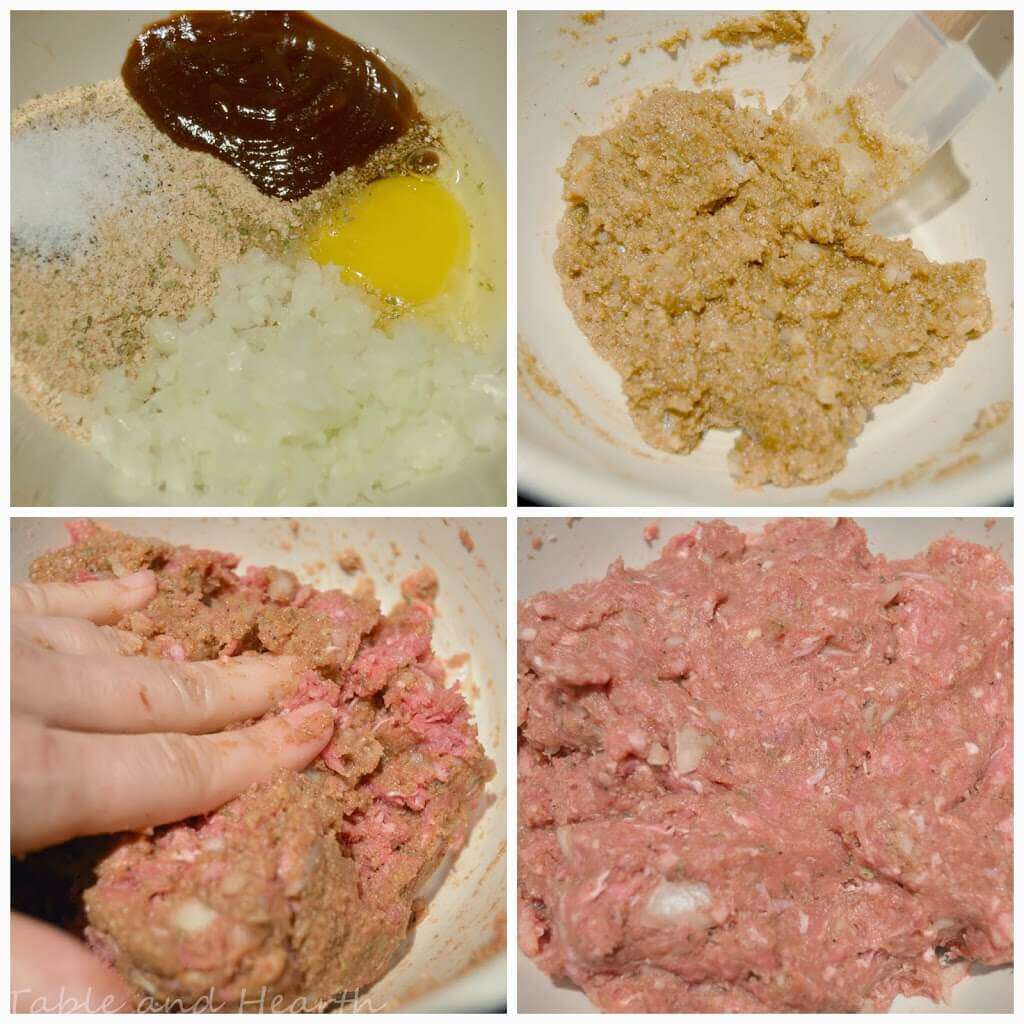 Slather it in A1 on top then bake.  I of course doubled the amount on top cause I like alot of sauce on my meatloaf. 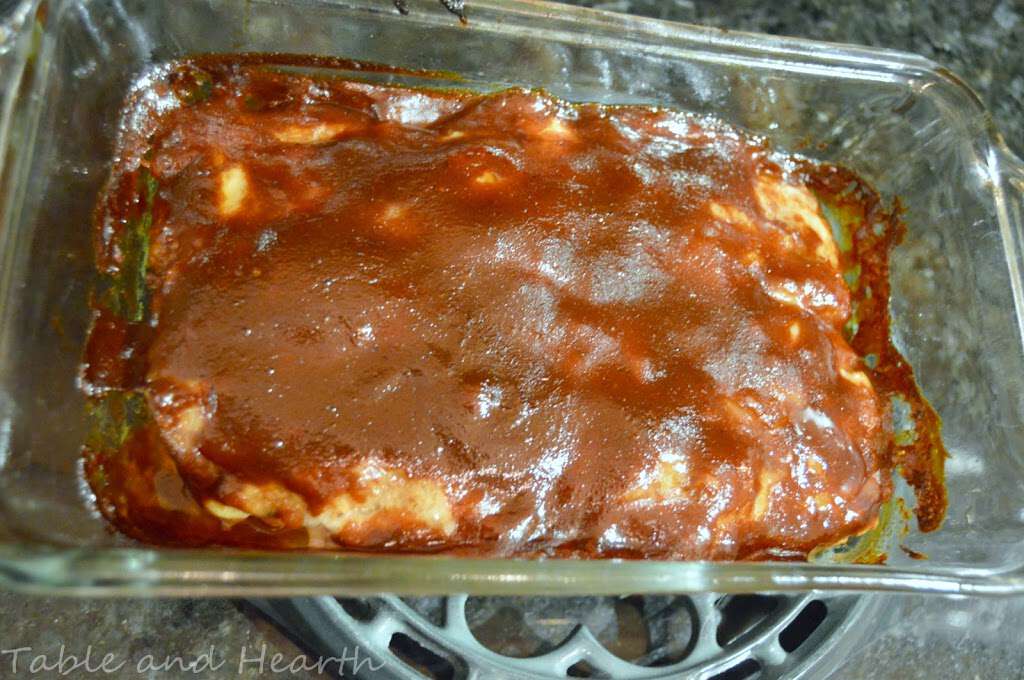 It’s crazy how much more flavor the A1 gets you!  This came out so soft and light, not dense and dry at all.  Next time I’ll definitely double it cause we ate almost the whole loaf in one sitting.  Matt is a bit of a meatloaf fiend and although nothing can apparently surpass his mother’s (I agree, it’s pretty amazing) this is in second place for sure he says. 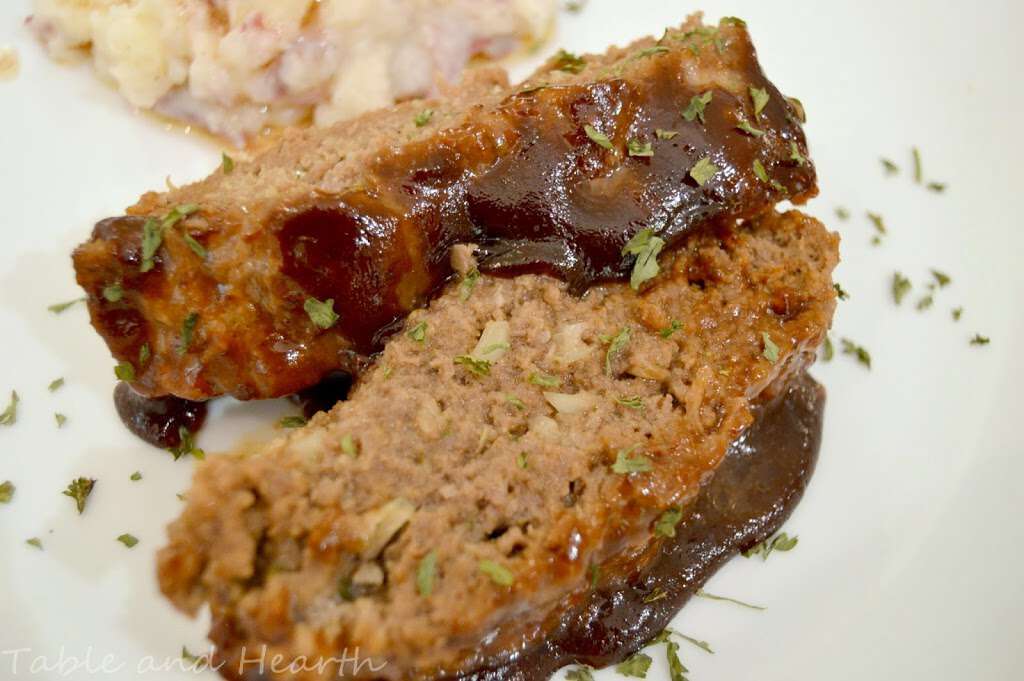 The second recipe is for these Browned Butter Mashed Potatoes from The Food Charlatan.  I made these a few days before for our office potluck Thanksgiving lunch but of course made a ton so I kept some at home for us to eat. 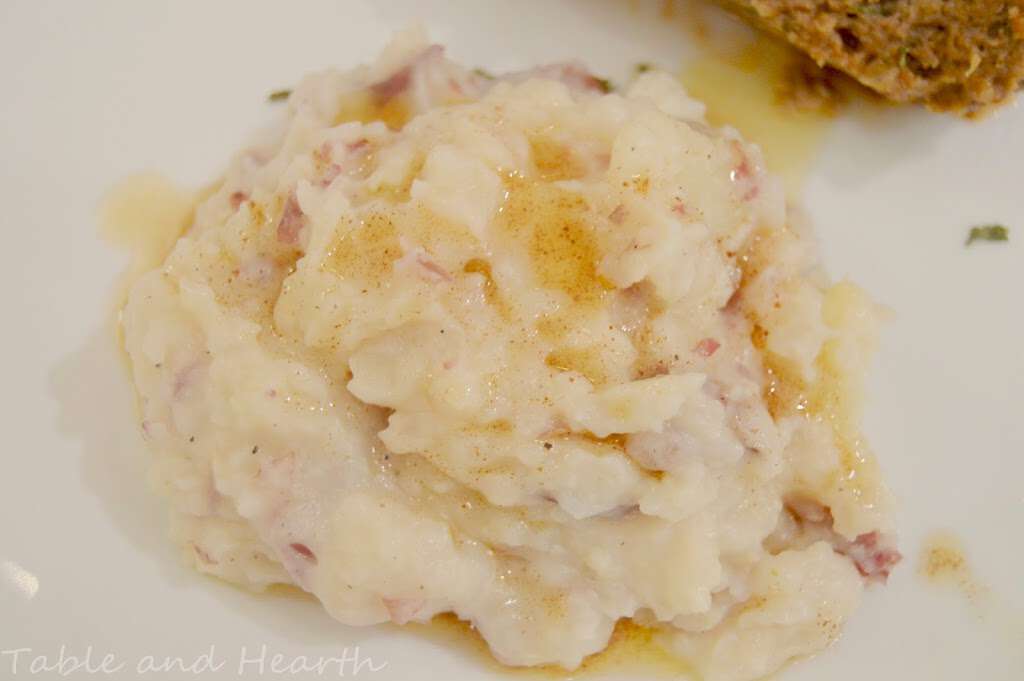 Now, there aren’t any photos of my process for these cause they were not nice to me that evening.  The kitchen was destroyed.  Almost every kitchen device I own was dirty as was almost every kitchen surface (I’m still finding dried mashed potato in places).  And they killed my immersion blender.  My beloved immersion blender.  RIP.  They are lucky they came out so amazing.
I tripled the recipe since they were going to work so I had 15lbs of red potatoes on my hands.  The boiling and seasoning parts were a piece of cake, my issues were with mashing them.  They were very sticky, very.  I started with a regular ‘ol handheld masher – 15lbs to do so nope, not by hand.  Then to the immersion blender – the stickiness caused them to accumulate around the blade instead of leaving the sides, therefore burning up said immersion blender, smoke and all.  Next up was the KitchenAid stand mixer – nope, didn’t even put them in the bowl, if they killed my immersion blender I was sure as hell not going to let them kill my sacred vintage KitchenAid.  Final attempt was the handheld mixer – success… three hours later and success!  Kind of, there were still some clumps from a few potatoes that weren’t quite done yet, but I was spent so they stayed.
Like I said, it was all totally worth it cause these were seriously the best mashed potatoes I’ve ever had.  I increased the horseradish sauce, milk, and sour cream which helped the mashing journey as well as the flavor.  These are perfect to take to a holiday meal or party, just make sure you inform people that the sauce is browned butter, NOT gravy.  Most of my coworkers thought it was gravy and applied it as such ;) 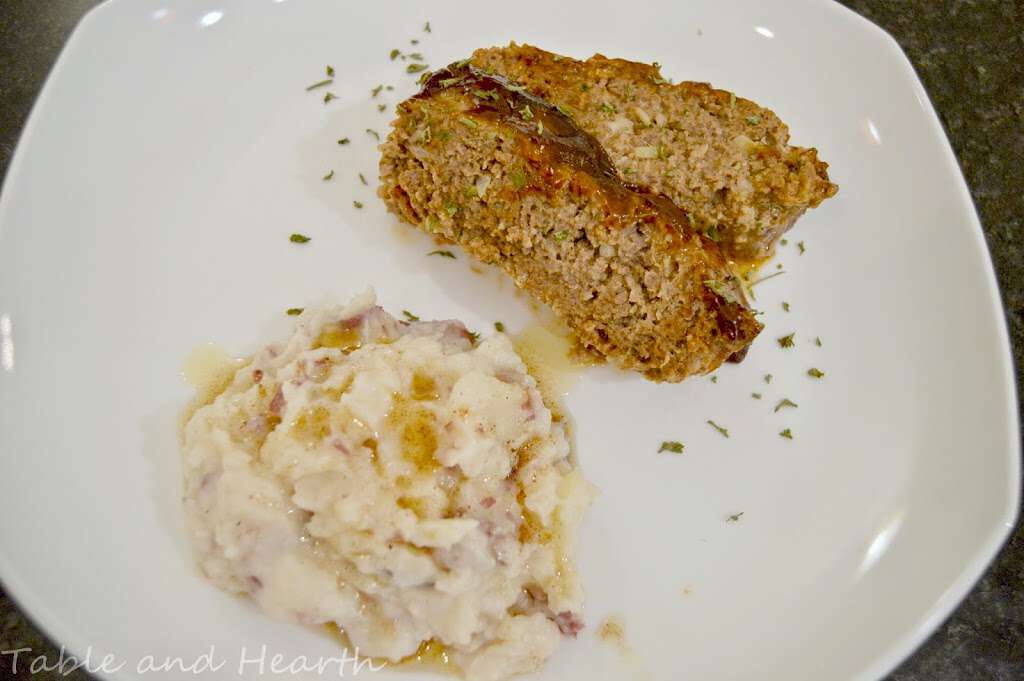 So there you go… your golden ticket to a happy husband – A1 meatloaf and mind-blowing mashed potatoes.  Throw in some classic rolls and a brew and they’d be even happier!