I hope you all had a good weekend doing all kinds of summery fun stuff!  We sure can tell it’s that time cause our little island (and our favorite lunch spots too) was super crowded, as it will be every weekend from now till September.  #islandlocalproblems

Thank you all for understanding (hopefully) my little rant on Friday :/  I just had to get that out and thought surely it would all get better after.  In case you are new here, I have been updating our master bathroom for a few months now and getting a new Silestone countertop was one of my last steps.  I ordered it on April 10th, it was templated on April 25th, and finally was set to be installed last Thursday but nobody showed up.  A million phone calls later, we were rescheduled for Saturday morning at 9.  A reminder of where we still were Saturday morning… 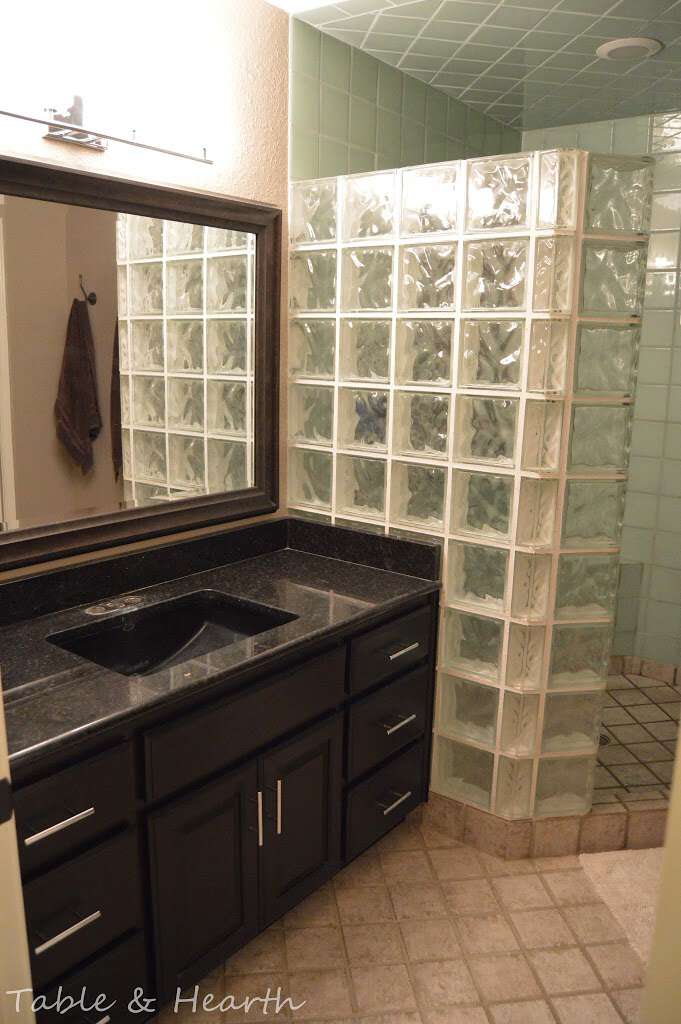 Unfortunately, more of the same.  Just as I suspected… and was afraid of… nobody showed up for our 9-11 appointment once again.  I called my guy at Home Depot who tried to track down the crew, to no avail. But at about 10:45 I got a call from them saying they’d be here in about 30 minutes.  I still doubted them of course but they came.  So from 11:30-1 they installed, and my ire was overshadowed by my excitement to see my “White Zeus” Silestone in person.

The guy that did the template was concerned about getting the old granite backsplash off the glass block without damaging the block (as much as I despise it, we can’t afford to “accidentally” destroy and replace it).  But it popped off super easy and they had it off quickly. 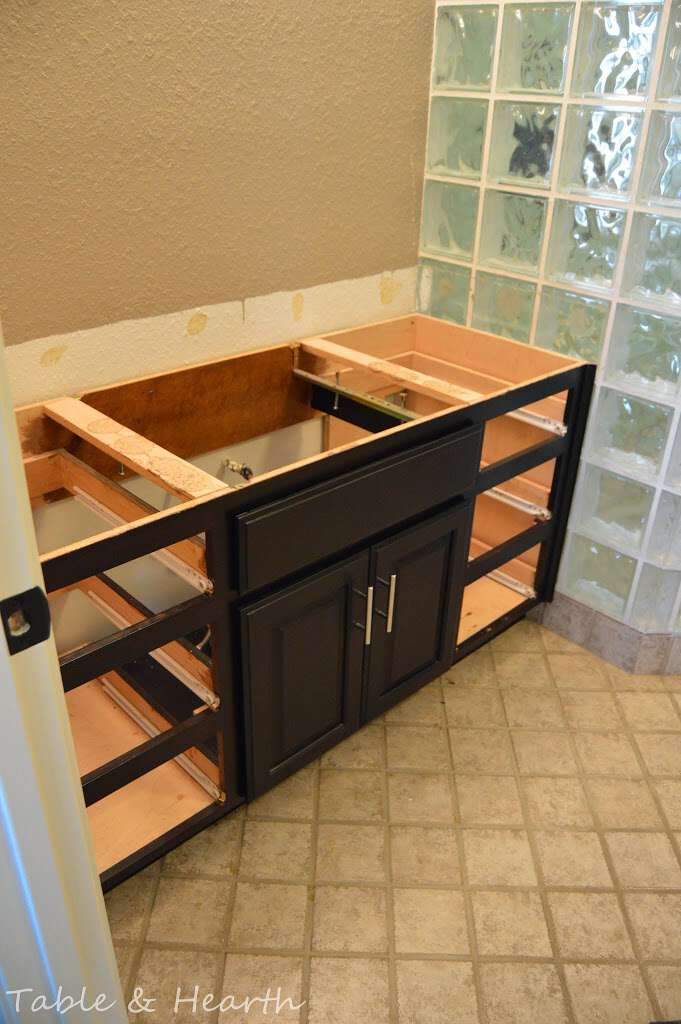 The sink I chose is the Kohler Vox with an 8″ widespread faucet.  I chose not to do another undermount because 1) they are a pain to install, 2) they charged $200 to install one, 3) the drop-ins are sooooo easy to install, and 4) this one saves a ton of room in the cabinet below.  We don’t wash anything in the sink so we don’t need a deep basin and since we couldn’t afford to add another set of plumbing to make it a double, this extra-wide guy still gives us sink-using room when we are both in there at the same time (which is rare). 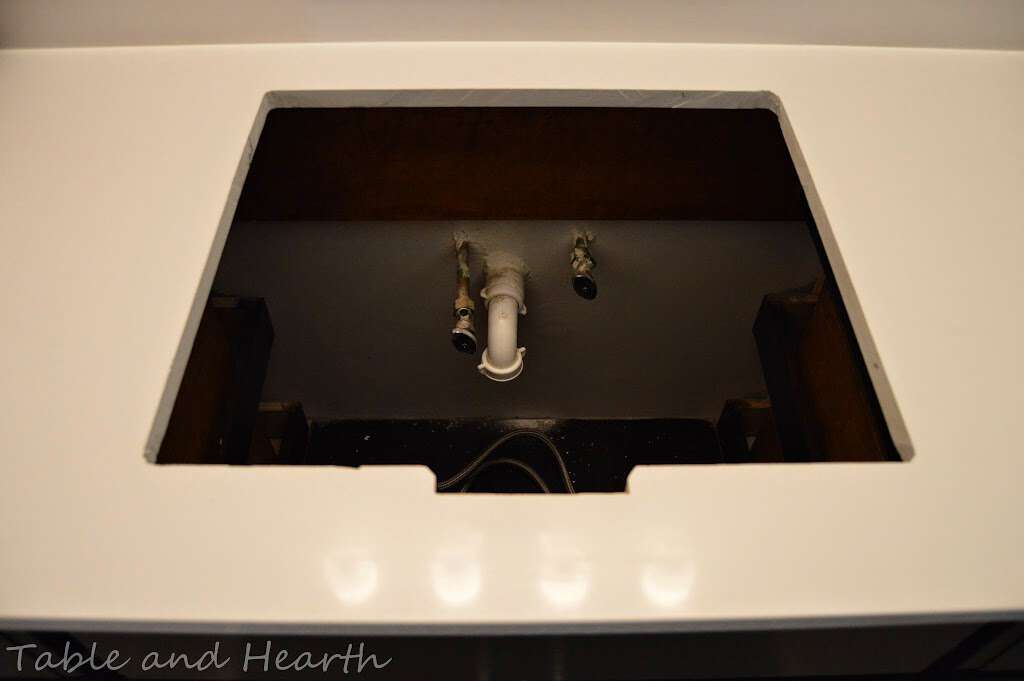 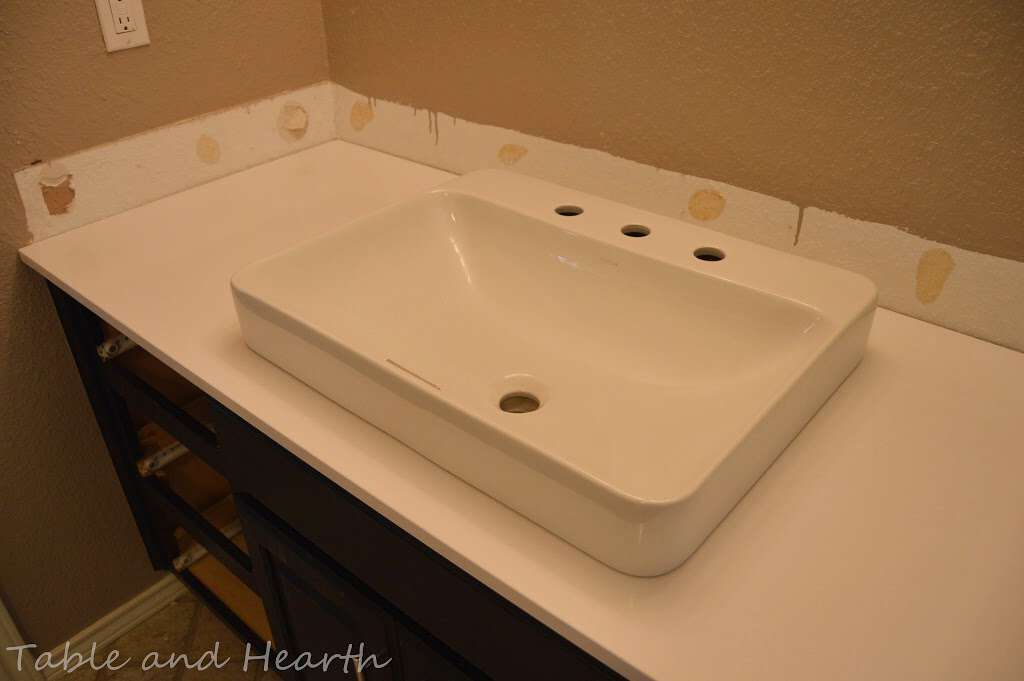 I also opted to do another matching 4″ (well, more like 5″ now) backsplash instead of tiling.  The stupid glass block and smallish stone floor tiles feel pretty busy and I thought tile would clash with all of that.  We wanted a sleek, clean look. 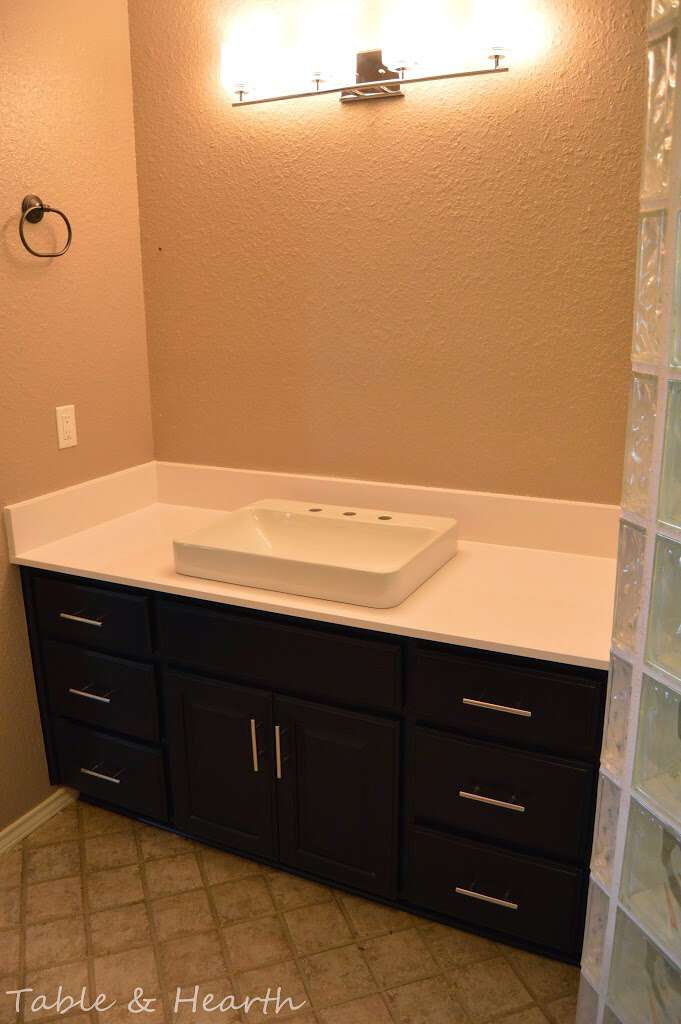 Another perk to a drop-in sink that has the faucet mounts on it is that you can assemble most of the rough-in valve and faucet steps where and whenever you want and not have to lay under the countertop to do it all.  Middle of the living room works for me :)  I love Moen with all my heart so we went with them again in this bathroom, using the Voss in chrome.  We may name our first child Moen, may. 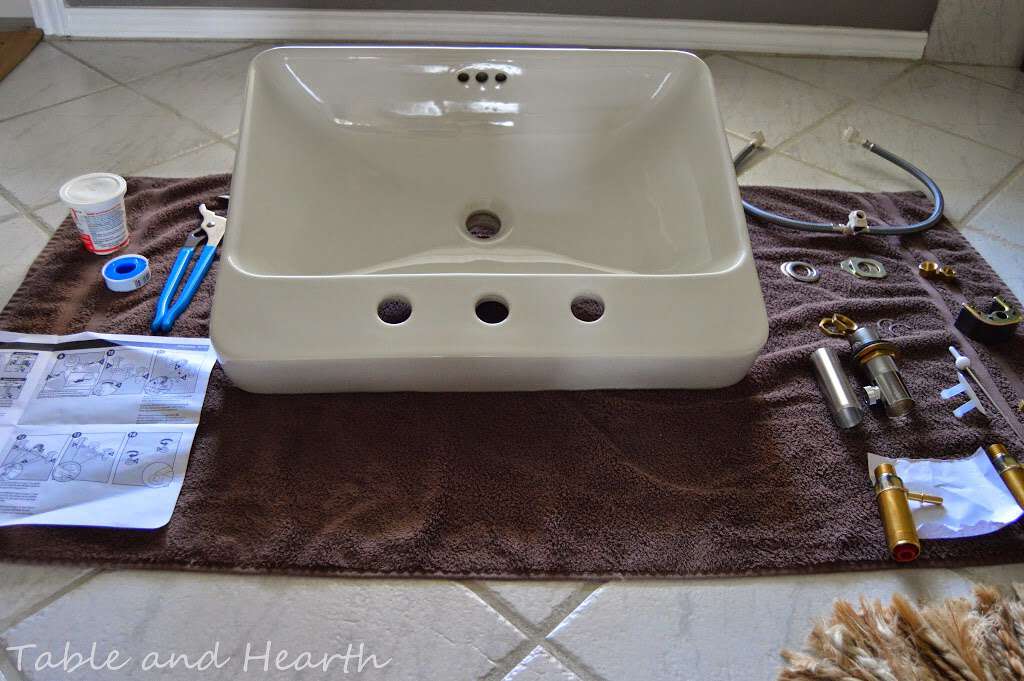 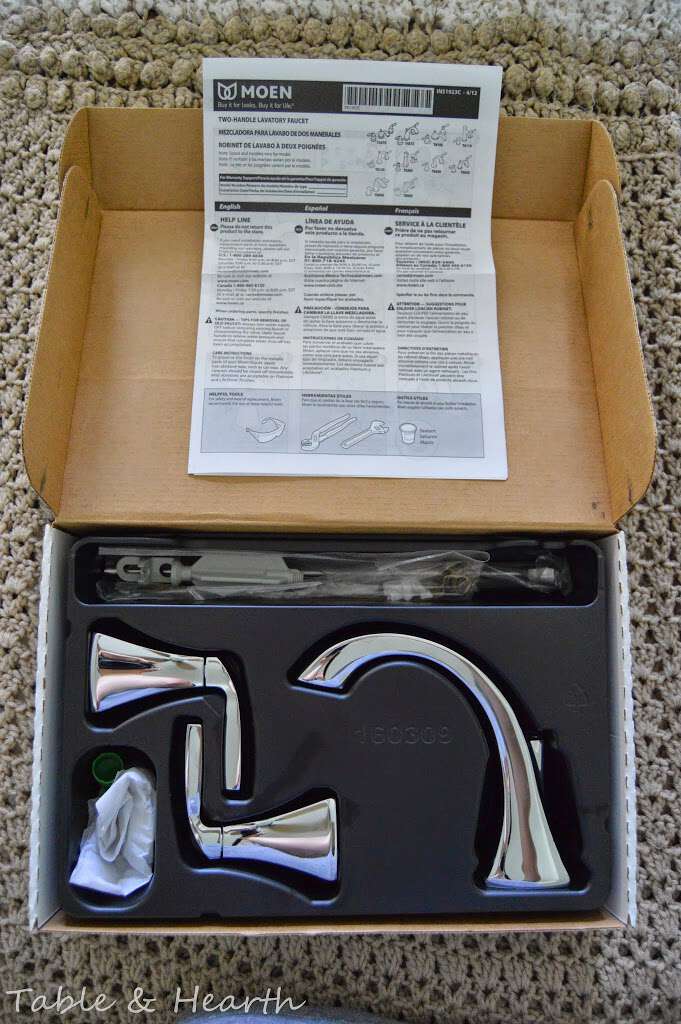 Moen installations are pretty straightfoward and I didn’t have any major issues this time around either, except I do have to go grab a P-trap extender now that the drain is farther away from the wall.  I had to do that in the guest bath too.  I’ll post about that when I do it because I looked around alot for advice when I had to do it the first time. 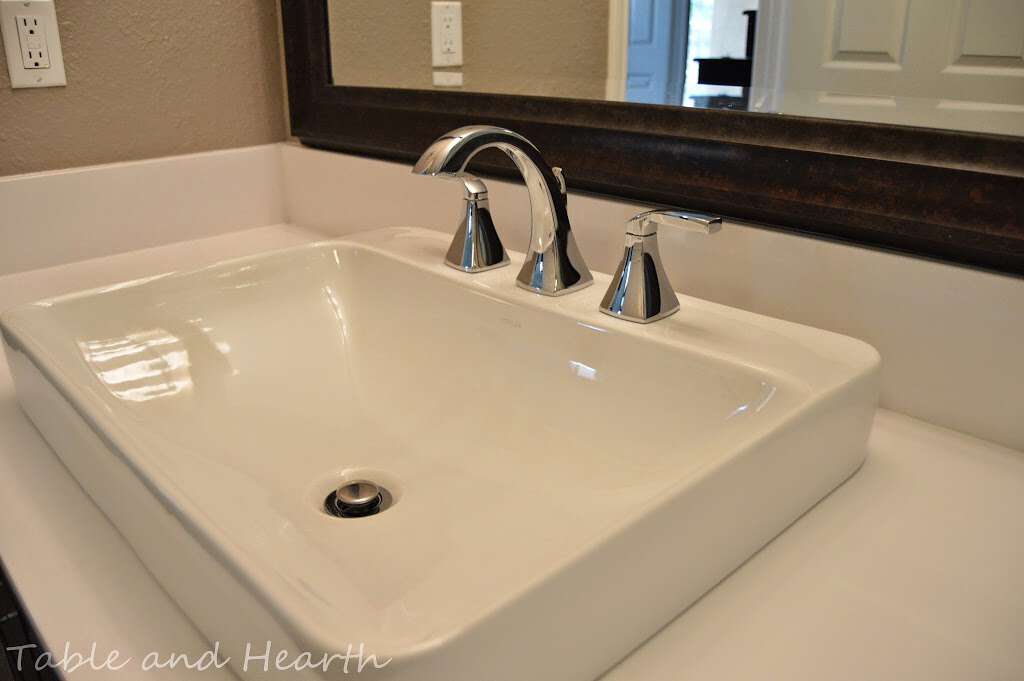 So, minus an operable drain function right now, we are otherwise done!!!  All that remains for this bathroom update is to get some pretty accessories and a new bifold door for the closet.  The louvered, yellowed, rickety piece of crap has GOT to go!!!

The vanity looks twice as big with the white and it all looks so clean and sharp.  I love the contrast with the dark wood and all the shine from the chrome. 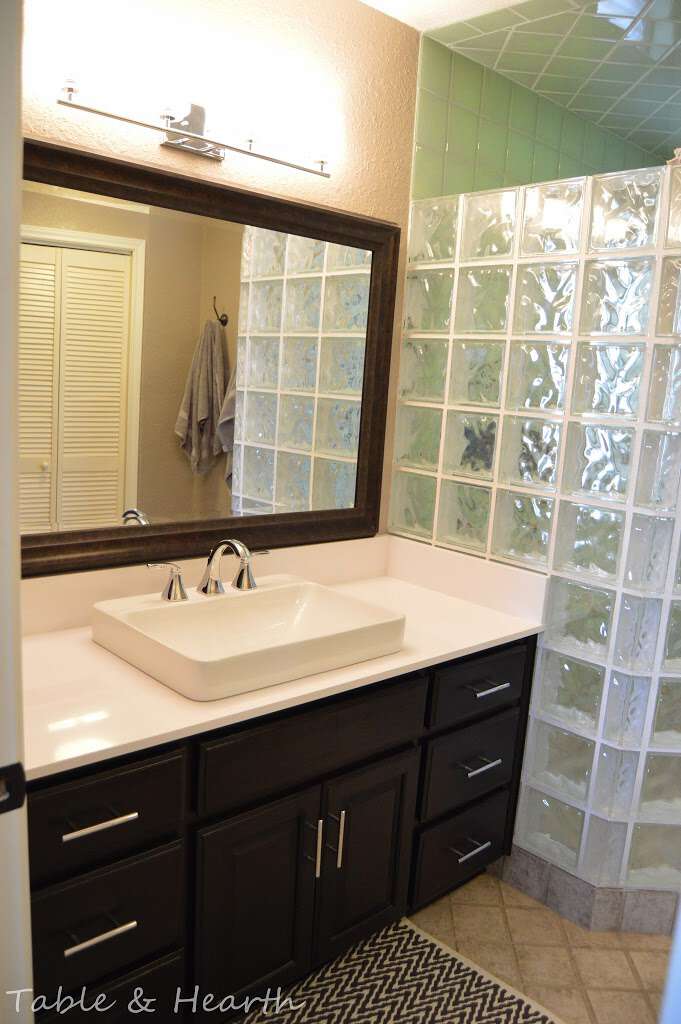 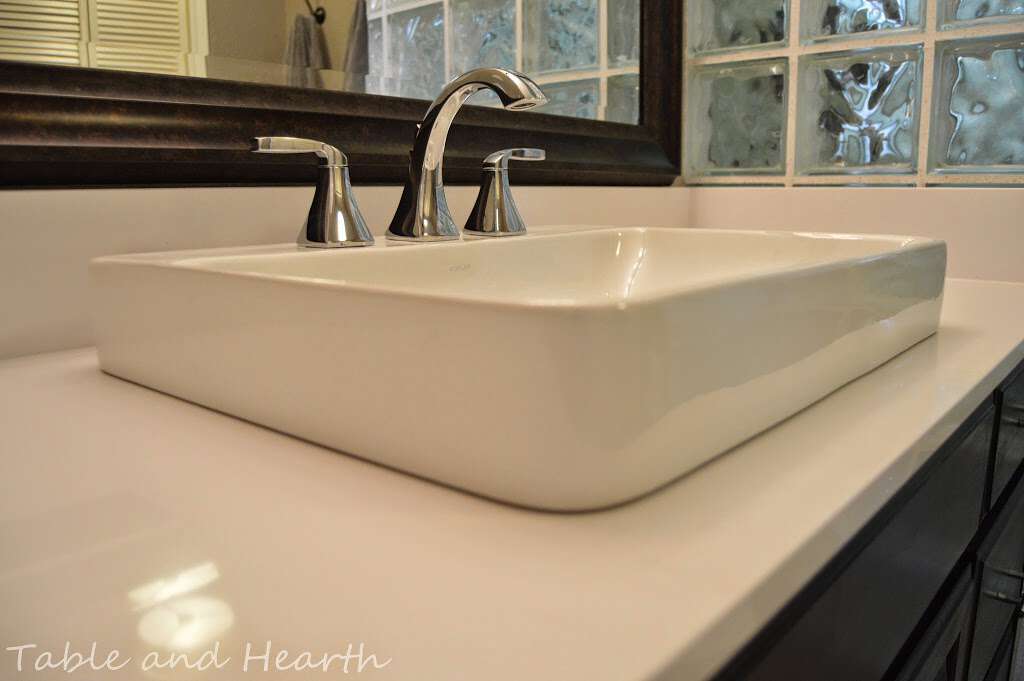 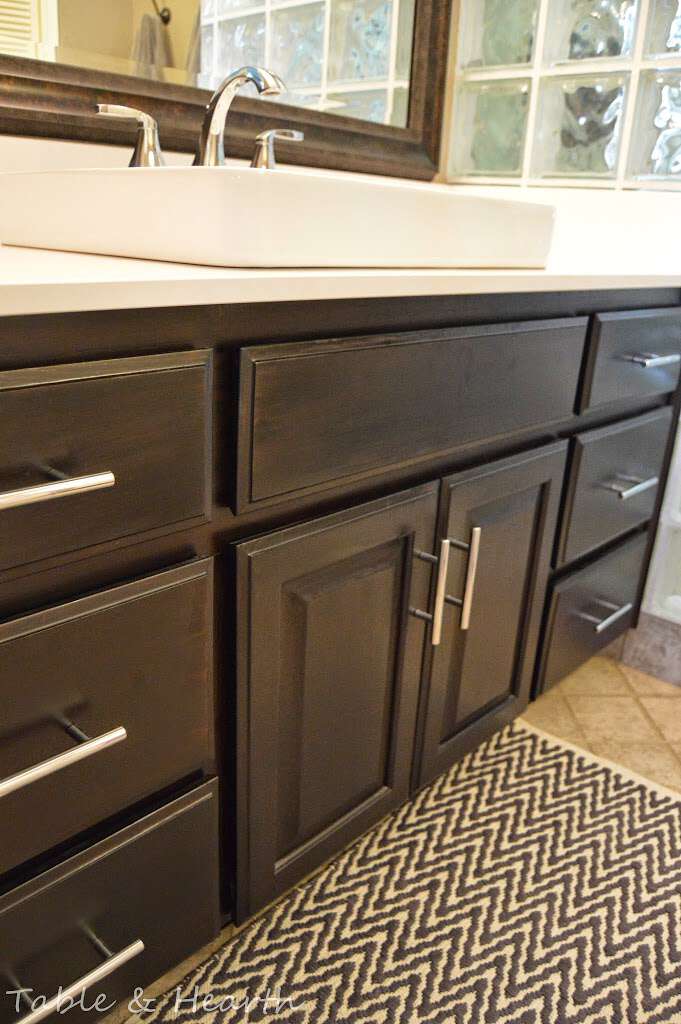 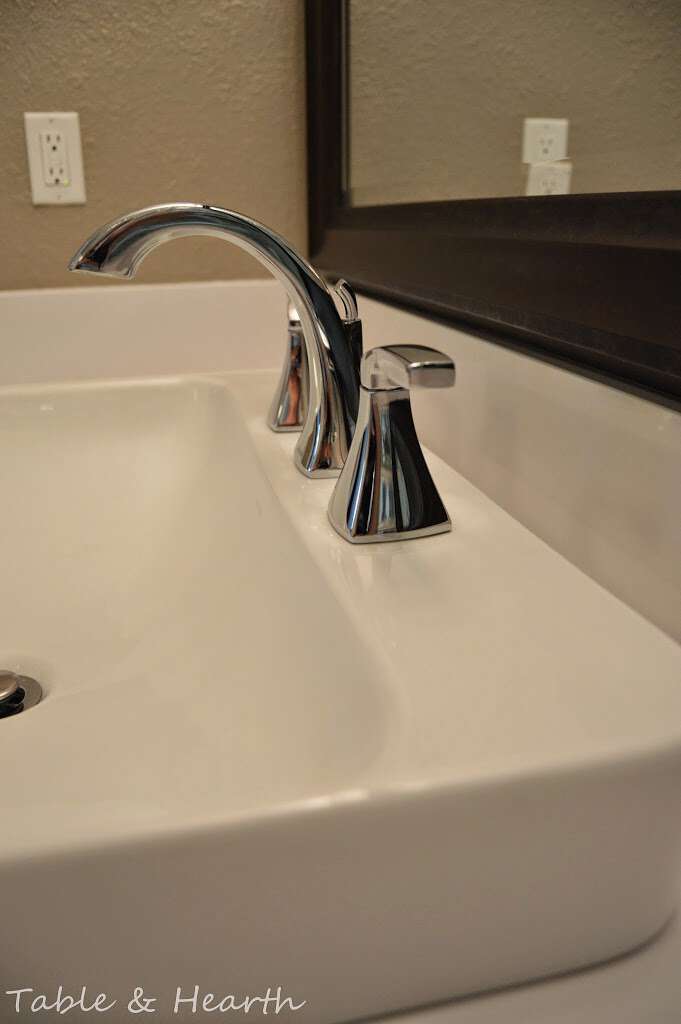 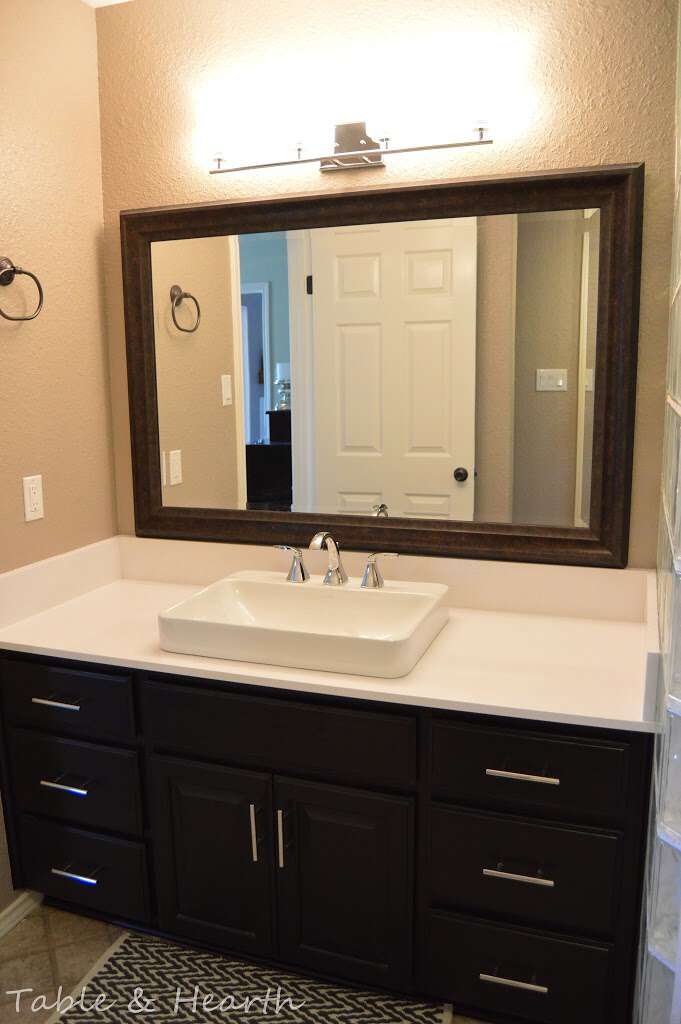 How insanely better is that?!?  I adore it.  Like, too much.  Now, I am still pretty angry with the whole situation and am working with Home Depot on all of that but geez, at least they finally came through and I didn’t have to cancel my order, beat someone up, or anything.

We got a ton of stuff done around the house this weekend so look for more project run-downs around here and some sneak peeks on Instagram this week and next!

*None of this was sponsored by anyone in any way, we just REALLY love these brands a ton.