There are always little annoyances and off-kilter things you find once you’ve started living in a house for a short time, especially an “older” house.  Like drawers in corners that don’t open all the way because of handles, or a freezer door that won’t open all the way because of the wall it’s next to, curves in walls, mystery switches (I was Monica in this Friends episode for days), or off-center fireplaces, front doors, and ceiling fans.  Yup, all quickly obvious, and all of which we have.  Then there are the gems that rear their head many years down the line when you’re trying to get sh*t done.  Like in our bathroom updates where this pleasantry happened. 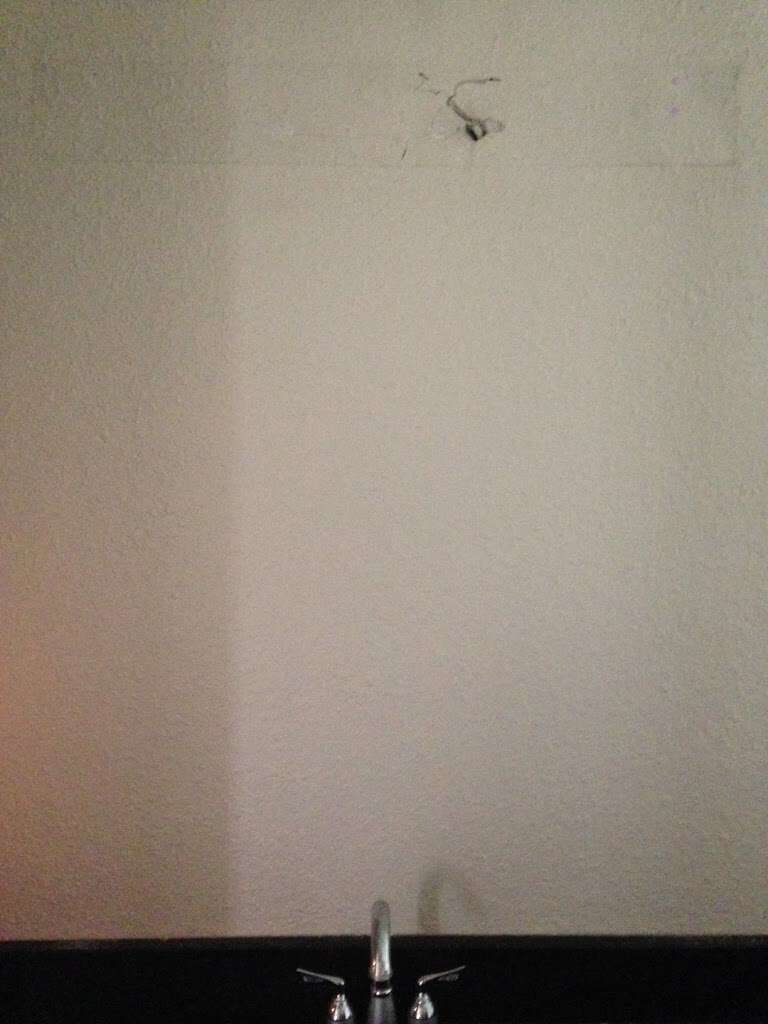 Just three wires, coming out of a quarter-size hole in the drywall, off-centered, no junction box or anything, dangerous as hell.  WTF?!? I blame 1) the builders of course, and 2) the previous owners who remodeled the master bath and didn’t fix the problem, just put a light over it.  Both fixtures in the bathrooms had large rectangular bases (outline vaguely seen in the master photos) which conveniently covered up the off-centered hole.  Then we come along wanting to do a quick light update (usually in the afternoon) and tada!, now have to jack with this.  There is nothing worse in the DIY world than these time-wasting tangents you have to chase down. 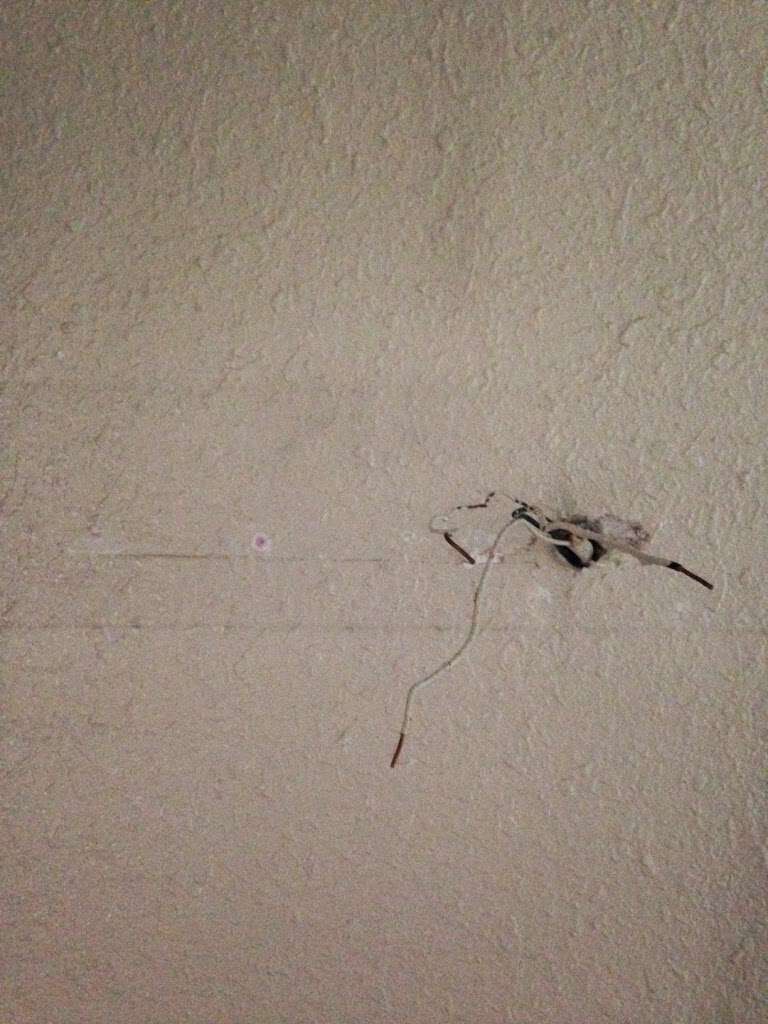 First time dealing with this was in the guest bath, it was relatively where it needed to be, only an inch or two off to the right, but still, over the sink.  I didn’t have much knowledge about electrical stuff, and still really don’t, but I did some research online, figured out I need some sort of “old work” blue box, then spoke to many a hardware store fellow and explained my situation.  About 3 of the 4 couldn’t understand my very simple, with pictures, issue, likely because they weren’t paying any regard to the blonde chick talking about electrical stuff.  #DIYgirlproblems #canIgetanamenladies.  Finally, one at Home Depot was very helpful, got me what I needed, and told me what to do.  I knew the peep-hole sitch wasn’t right but still, cutting a big hole in the drywall scared me (and the husband).  In the guest bath, the hole-cutting and box-securing took some finagling but it was a success and the new fixture covered it just-so.  Regretfully, I didn’t get pictures of this first encounter, just the successful end: 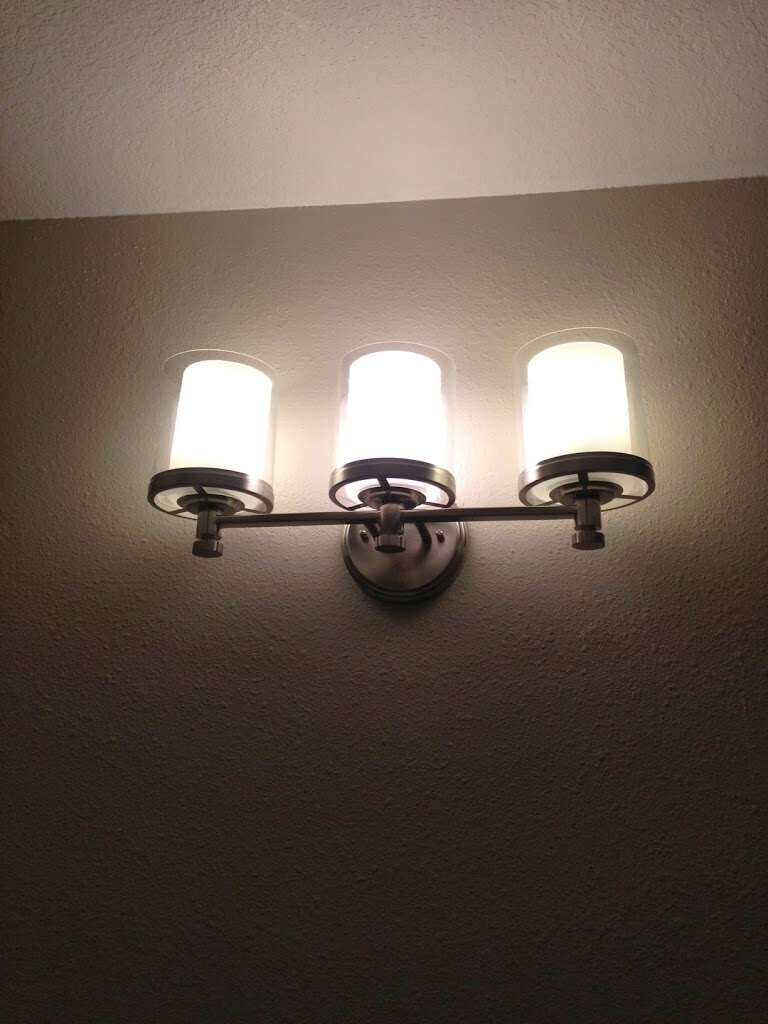 Not so easy in the master…In the master bath, the hole was off-center from the sink by a good six inches (again, WTF??) and our new fixture didn’t cover that at all.  We now had two tangents, making a new hole and box and patching the old one.  And it was Saturday afternoon and we had somewhere to be that night, so no light in the master bath Saturday, Sunday it was.  I have never patched a hole other than filling a nail hole so off we went Sunday morning.  Grabbed the blue old work box and found some all-in-one products to patch with which eased my nerves some.  Box-adding took a little while with the fine-tuning of making a snug hole as it did in the guest bath (husband wanted to do it this time) but the hole-patching was pretty quick and simple. 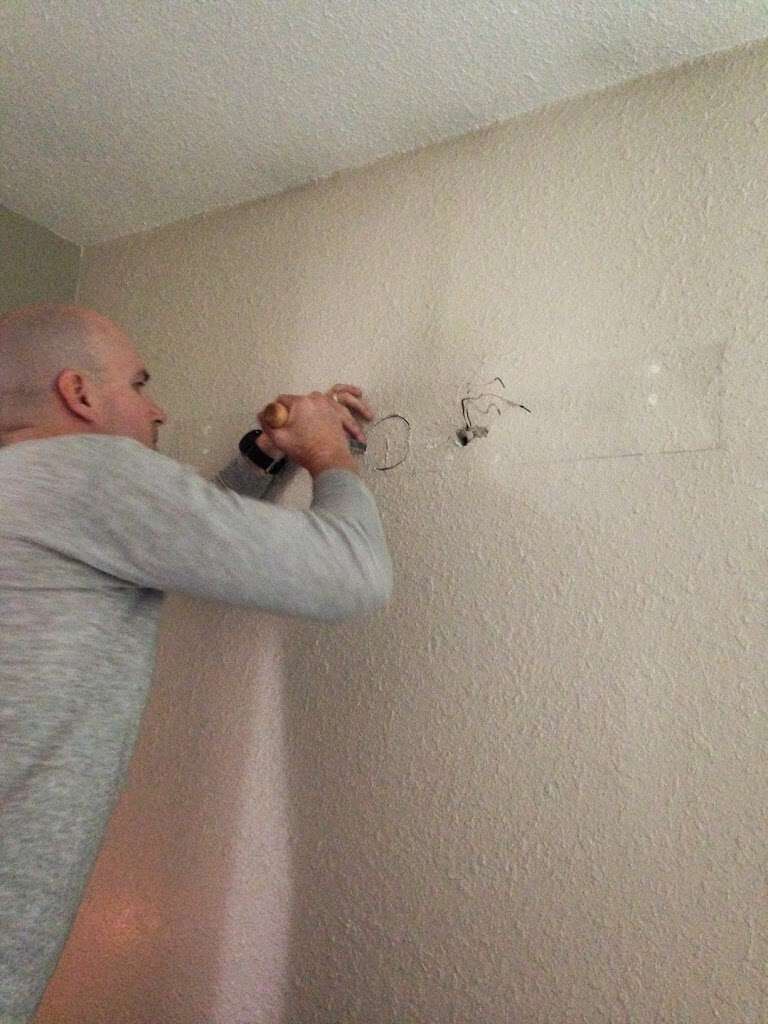 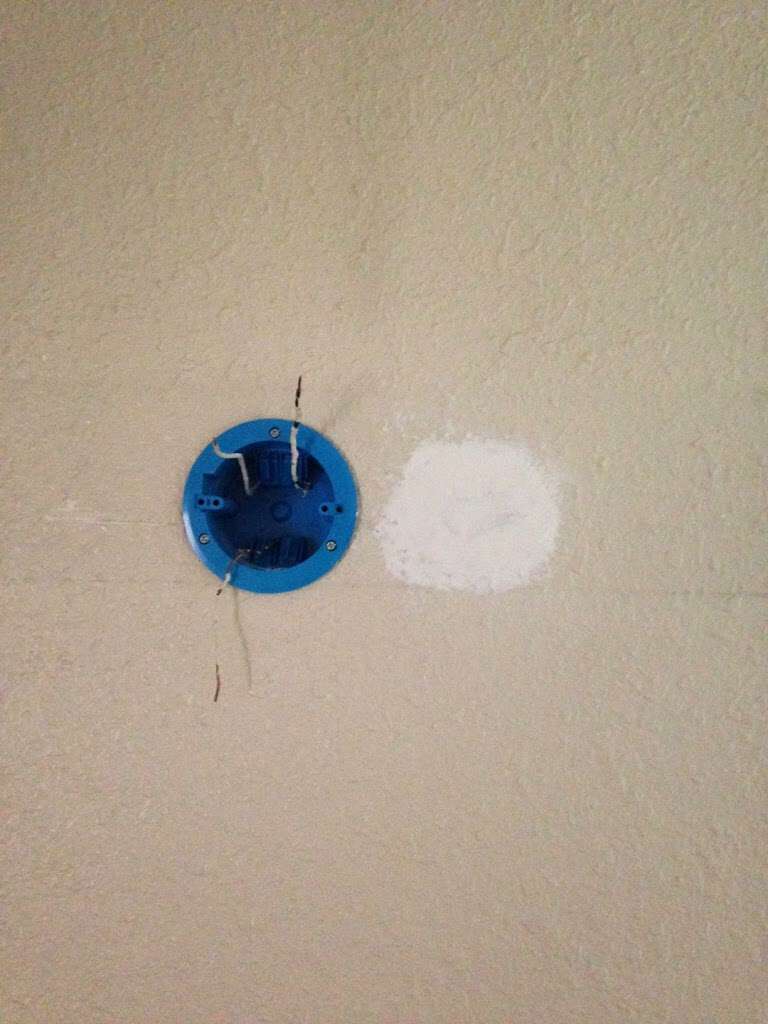 But then I realized our walls are textured and there would be a huge smooth spot next to our light.  Friends informed us there is texture in a spray can so off to town again to find that.  The stuff was legit and it only took a few squirts, but gets everywhere FYI. 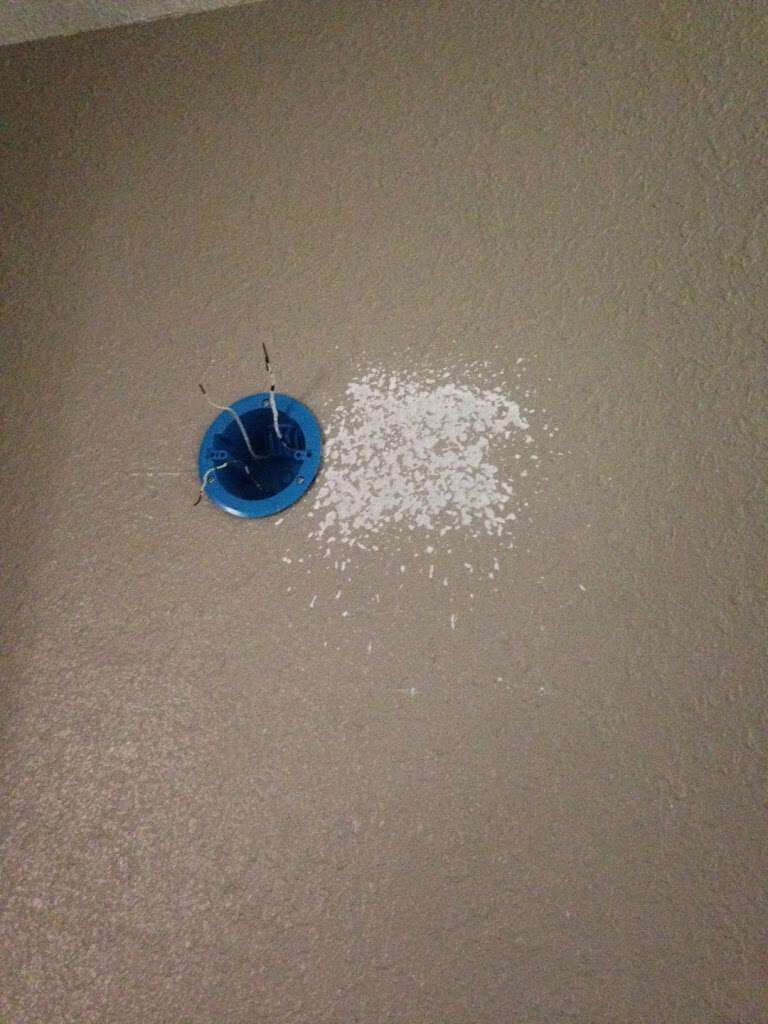 This is where our operations skidded off course (and why it is painted under the texture in the above pic).  The texture’s can says 30 minutes to dry but it wasn’t by then, and I was impatient since it was Sunday and we still had to install the light and mirror before dark…so I tried to gently paint over it anyway.  Wrong move.  Duh.  It just smoothed it out.  So I had to wait for the paint to dry, re-spray, wait at least another hour, then paint again. I had a fan on it for over an hour and when I did the second paint attempt, it STILL smoothed out. Ugh! Lies! And it moved enough around so that the mesh from the patch was peeking through, no matter how much paint I tried to glob on.  No pictures of that, too mad. 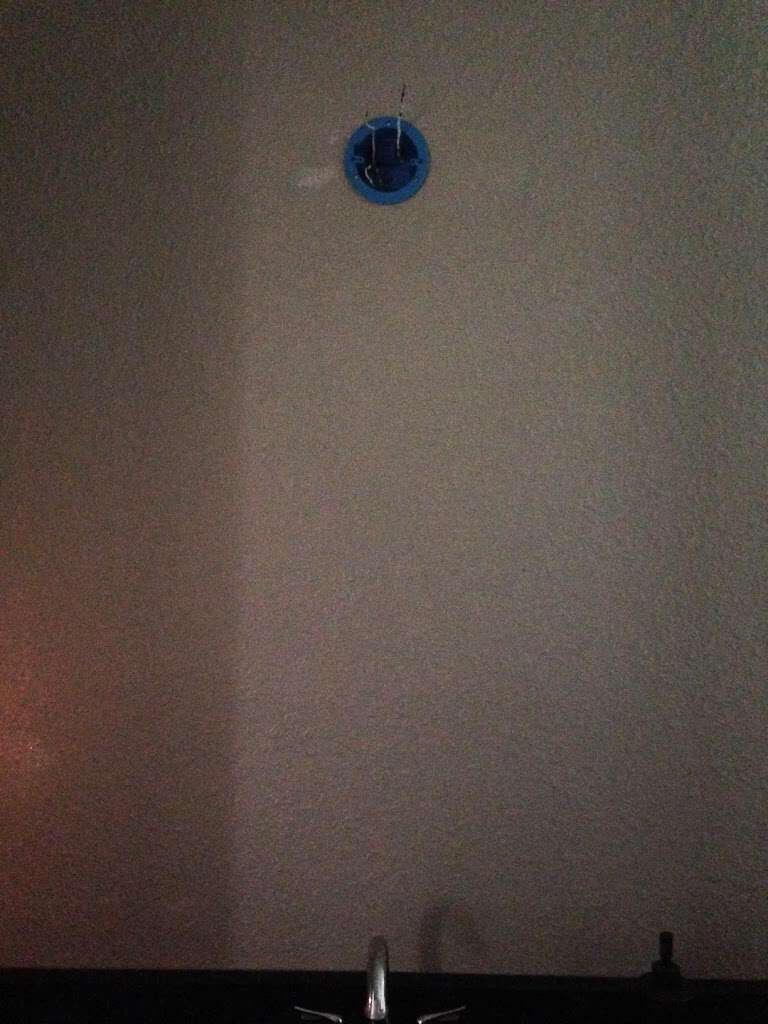 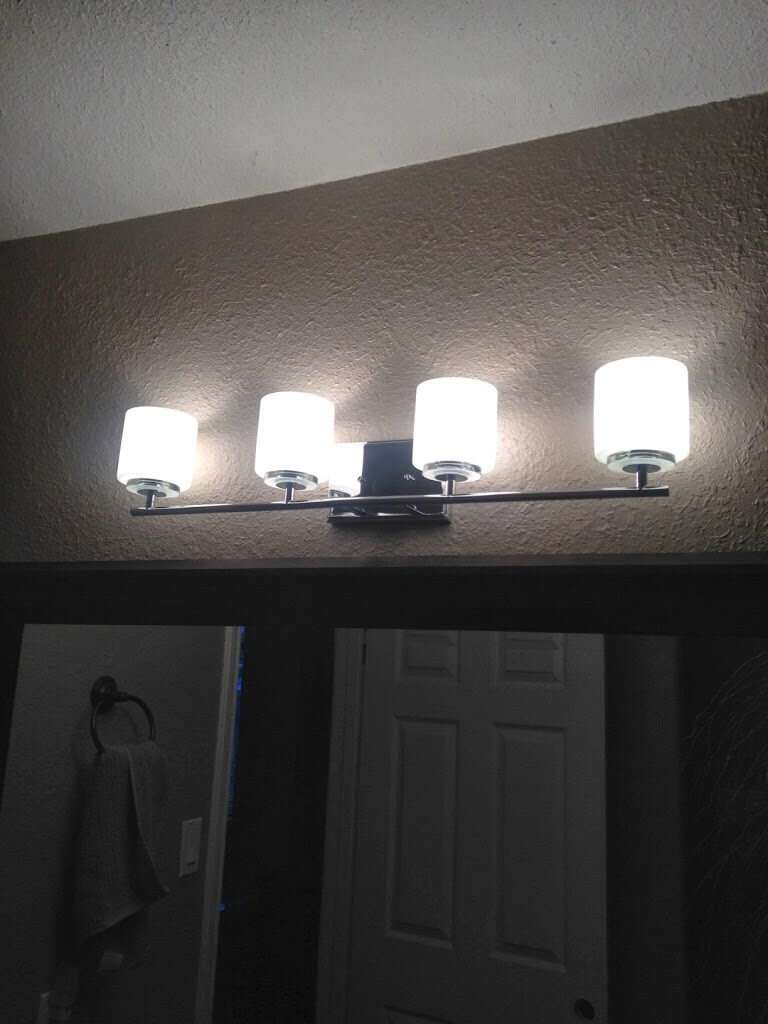 Whatever, we had to have a light, so we finished.  I have made globs of spackle and painted that area a couple times to get rid of the mesh pattern and while that has been relatively successful, you can still tell something went array if you look closely next to the light.  But don’t look too closely, there, or at the cabinets, they aren’t perfect either.

These are the times we have to take DIY breaks and give it the stink-eye when we walk by.  As usual, hey, at least now we know how to handle this crap if it comes up again.  We have replaced all the fixtures by now except our living room fan and kitchen track lighting…good lord I hope there’s a box installed for the fan, nothing surprises me here anymore though :/

4 thoughts on “How to Repair Off-Center Lighting”