*please pin from original recipe, thanks!*
The last Asian/Thai food dish I did was so easy and came out so yummy I wanted to try another, but this time I tried a beef recipe.  This is the “Ginger Beef, Mushroom & Kale Stir Fry” from Gimme Some Oven (I still think that’s one of the best blog names ever).  I am so glad to find kale recipes now since the husband is allergic to spinach.  Kale has been such a great substitute for it and he loves it, I keep a frozen bag in the freezer for all my spinach recipes.  I’ve never seen it fresh at our grocery store so I’m going to try it in the garden this winter. 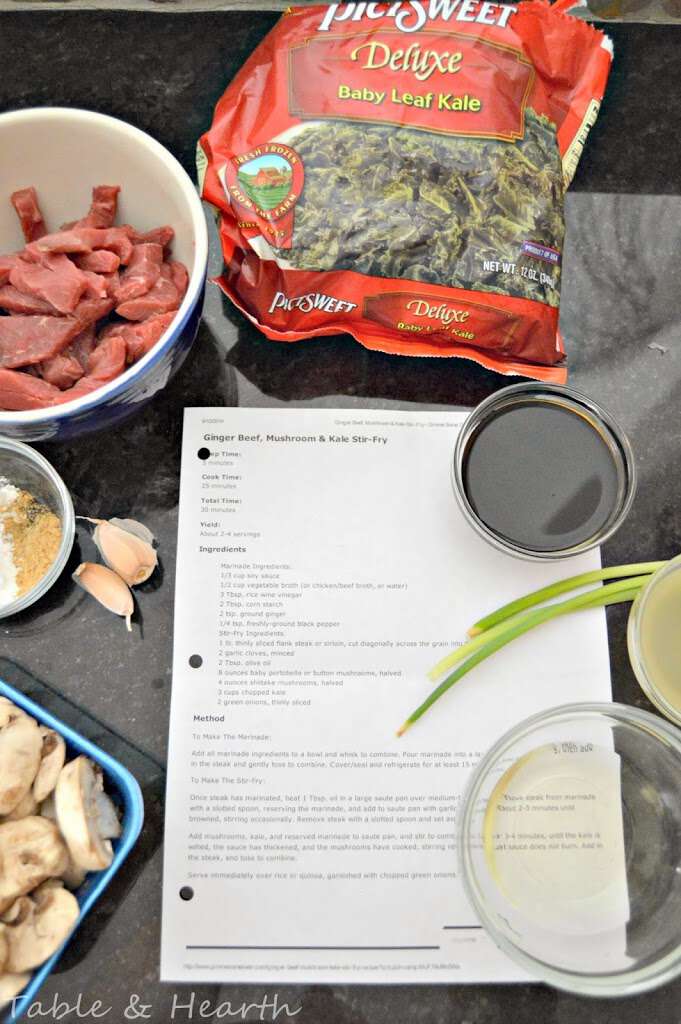 This has a simple marinade of soy sauce, vegetable broth, ground ginger, rice wine vinegar, pepper, and cornstarch to thicken it later. PS. This tiny mini whisk is used sooo much, love it! 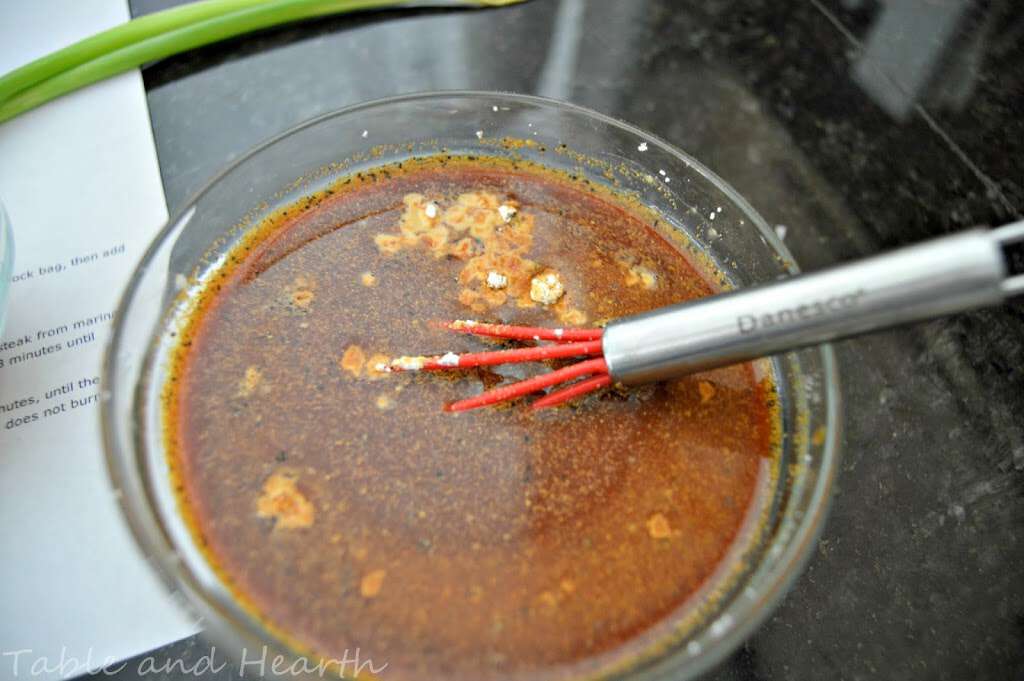 The beef I used was a thin steak (flank?) that was already sliced and ready to go.  I’m really not a fan of handling raw meat if I don’t have to so I have no problem buying pre-prepared options like this.  The meat gets combined with the marinade in a ziploc or container for only about 15 minutes or so.  The marinade will separate after a couple of minutes so I turned it and agitated it every once in a while to keep it mixed. 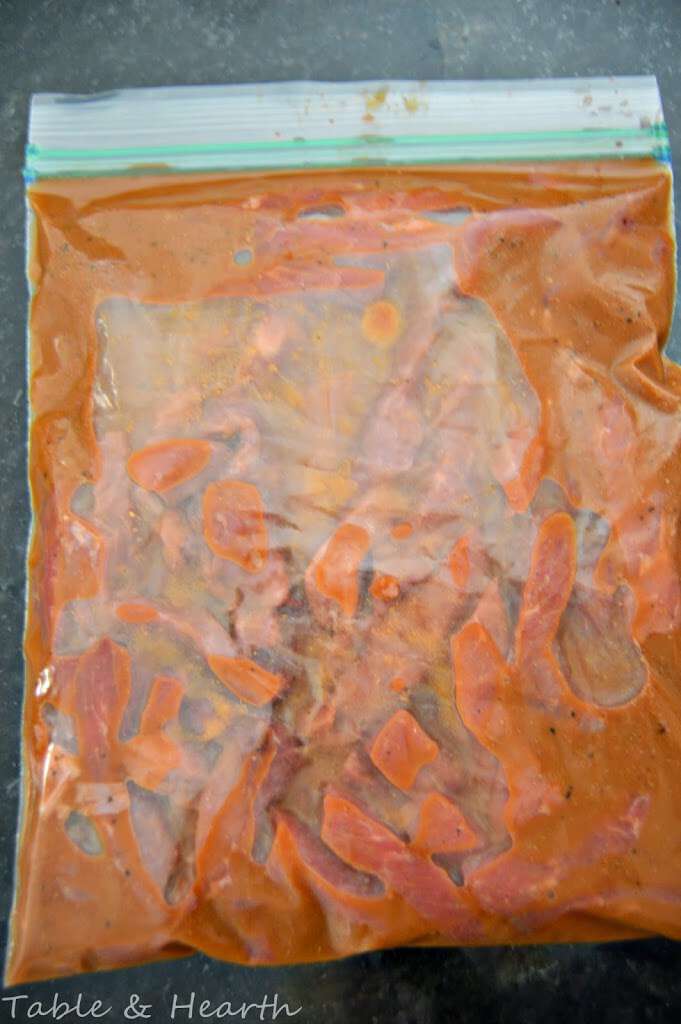 After marinating, the beef gets pulled out and sauteed, keeping the marinade for later. 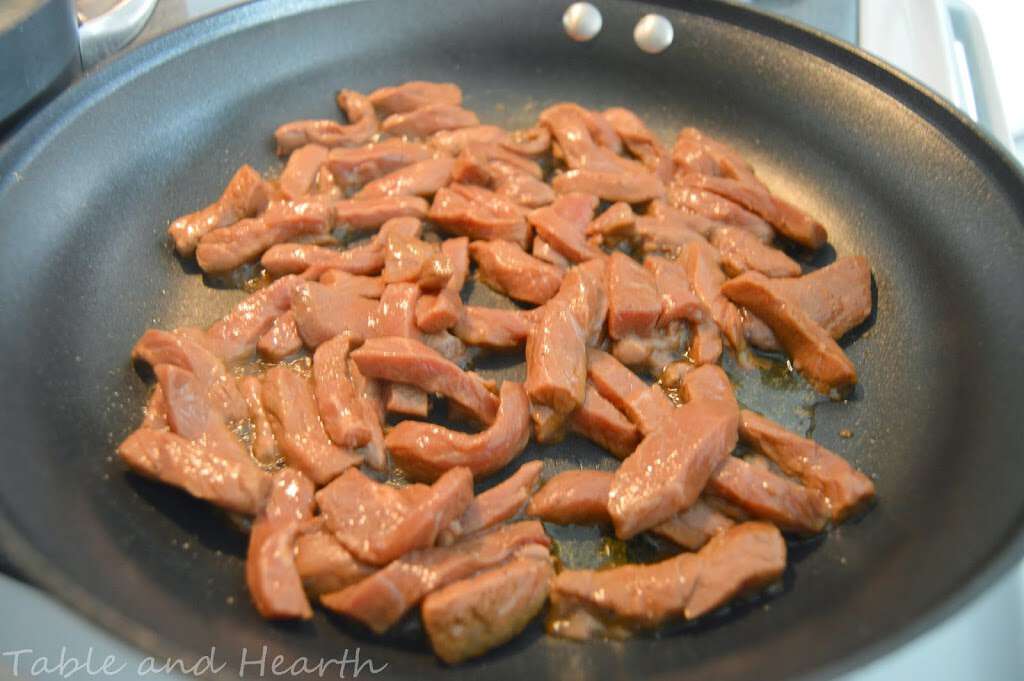 The cornstarch in the marinade makes the liquid around the beef nice and thick. 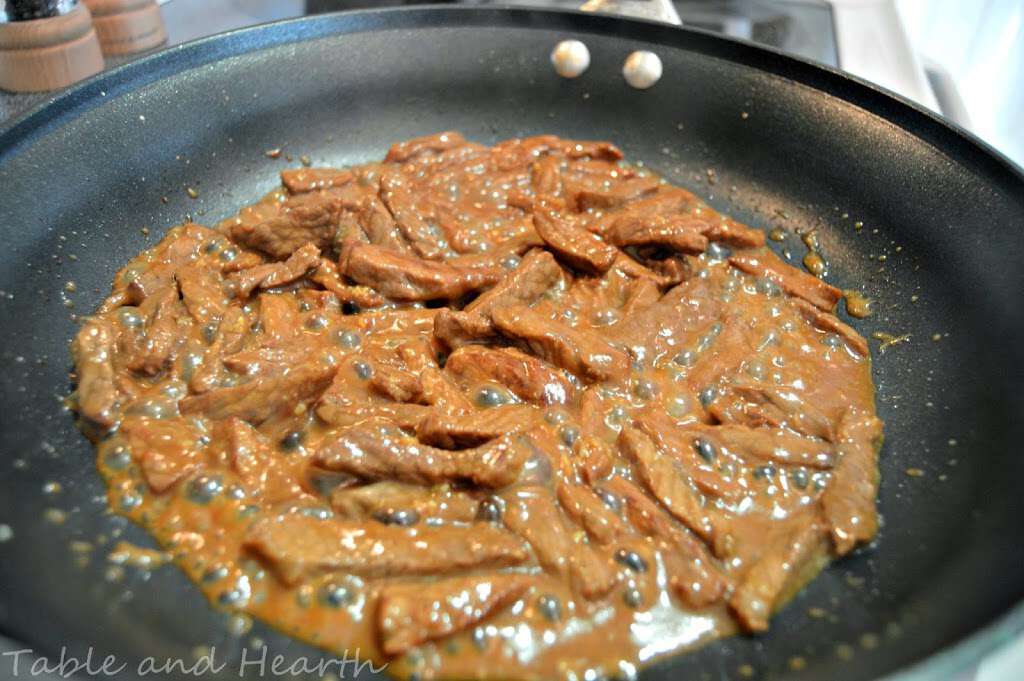 Once the beef is done, it gets set aside and the mushrooms, kale, and reserved marinade are added to the pan.  The mushrooms I used didn’t cook down much by the time it was ready so next time I’ll probably sautee the mushrooms separately so they get soft and brown. 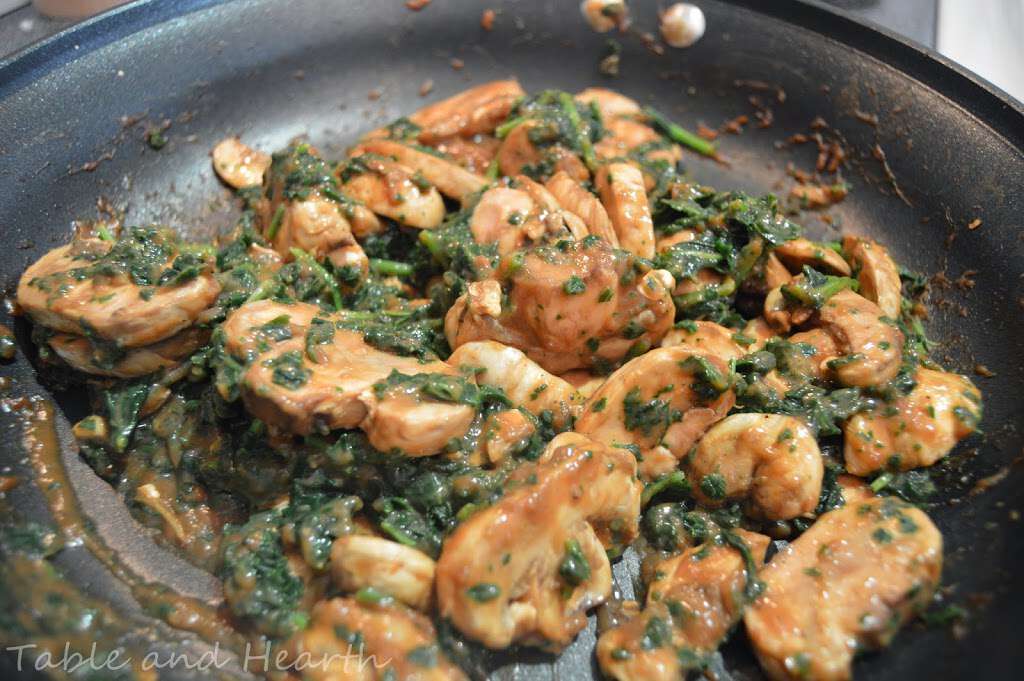 The beef gets added back to the pan and mixed with everything else.  Keep an eye on it because it will burn quickly.  There were some hairy moments with mine :/ 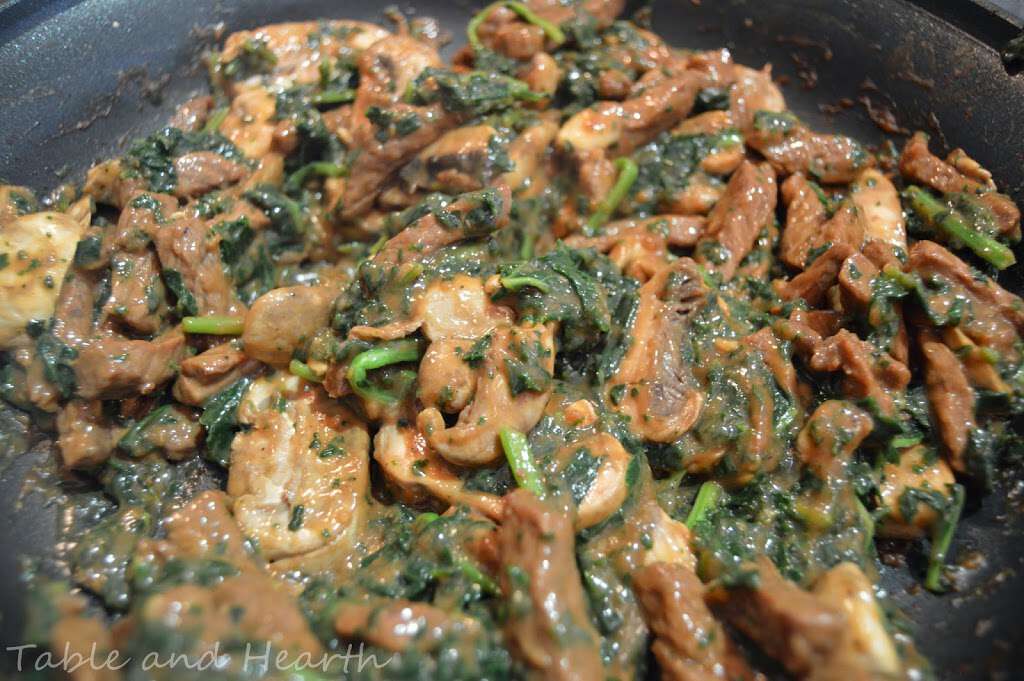 That’s it and it’s ready to serve.  I served it over some quick white rice but it would be good over noodles or even by itself.  Will try noodles next time. 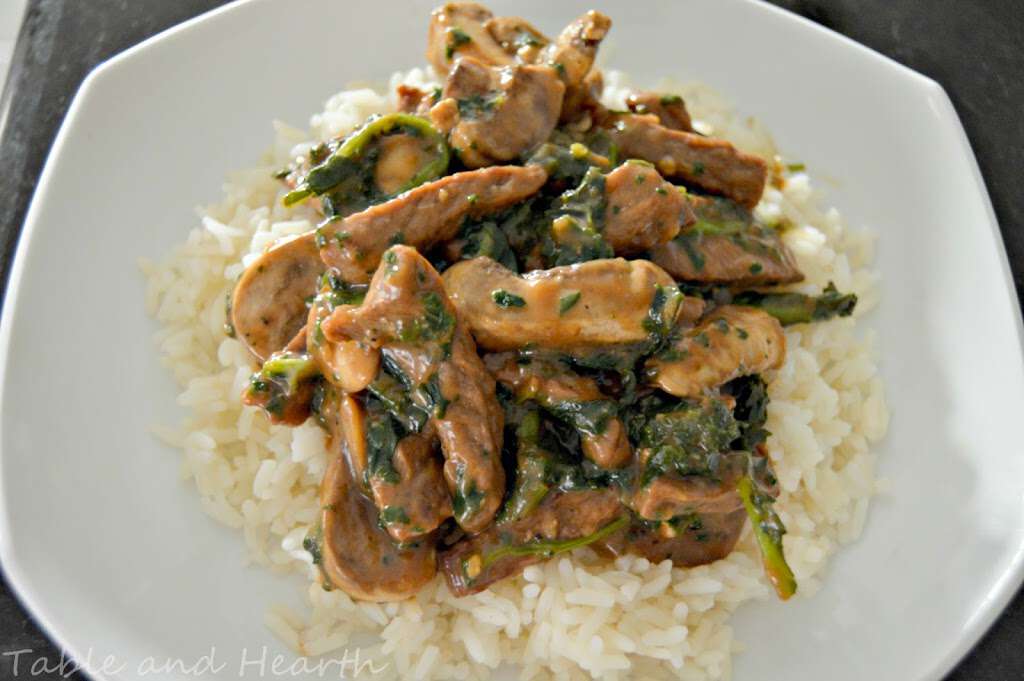 It did come out a bit on the salty side but not inedible.  I think next time I will reduce the amount of soy sauce in the marinade and that should help. 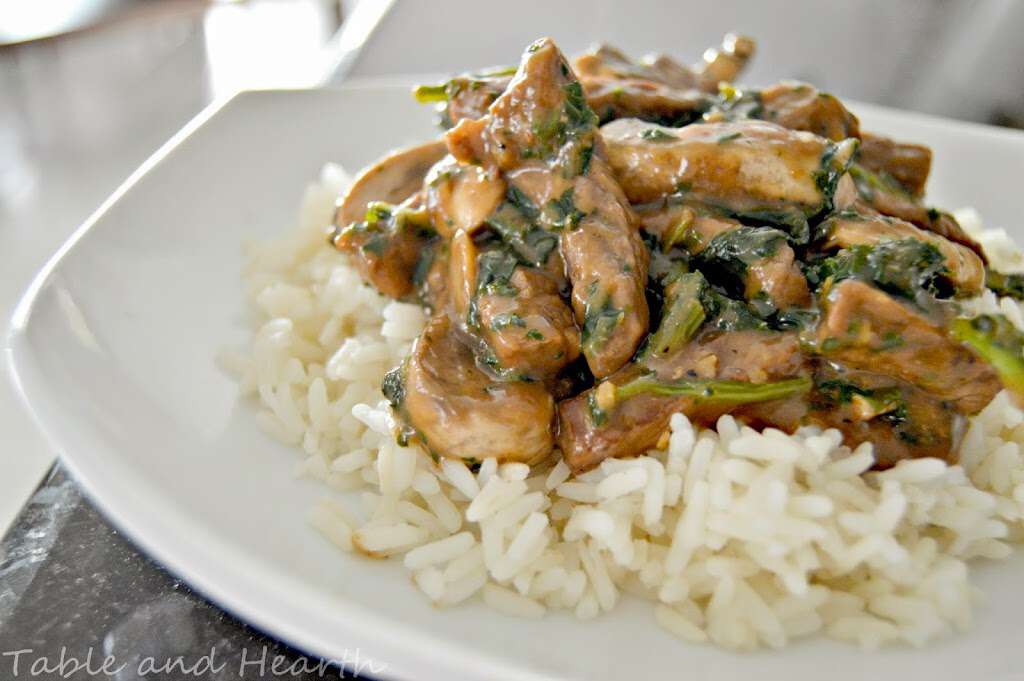 I love anything with a consistency that could be called “slop” so the texture of this was perfect and I love how it had plenty of sauce and smaller beef strips.  And it passed the husband test, which is of course the most important verdict :)