Ok, so I’ve blogged a corn chowder before (here), but I just can’t keep myself from the stuff and I have another one here today.  I am such a sucker for anything with “chowder” in it’s name, especially with corn, especially with bacon, and especially during this time of year.  This one is the Smokey shrimp and corn chowder from Bev Cooks, and I LOVE the addition of shrimp with all those smokey flavors. 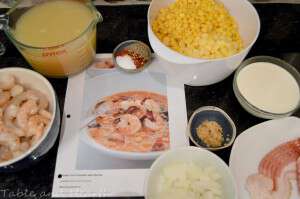 It’s all done in one pot which is always nice (as usual, I used my LeCreuset dutch oven).  First up is cooking the bacon, making sure to form all kinds of yummy bacon residue in the pot, then setting it aside and tossing the shrimp in.  The shrimp will cook in the bacon grease (drain some grease off before this if you want) and pick up that yummy bacon flavor, but still leaving that layer in the pot for the next step. 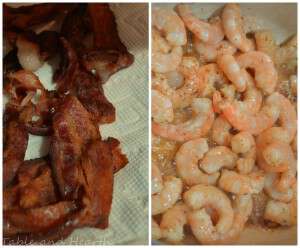 Wait for it…add your onions and all the spices until it makes this weird super-dry-oh-my-gosh-its-going-to-burn mass.  And as soon as the onions are translucent, dump in that corn!  With it, that layer of bacony spice goodness deglazes and incorporates into your corn and gets beautiful! 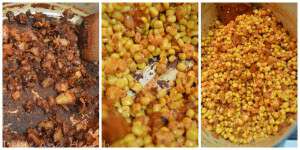 The stock and half-and-half gets added and then it simmers for a while, letting it all marinate together.  If you want it to be thicker (which I always do), use an immersion blender to thicken it, or ladle some out into a countertop blender then pour back in.  Since I fried my immersion blender at Thanksgiving, I ladled, blended, then added back.  New immersion blender was ordered yesterday BTW ;) 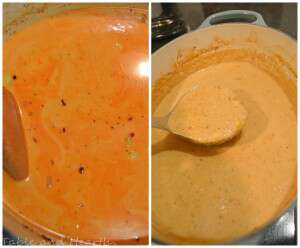 Serve it up in a big ‘ol soup bowl with the crumbled bacon and shrimps on top. 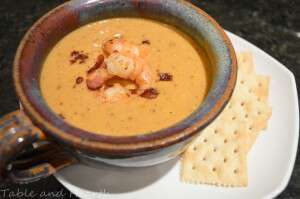 Isn’t it pretty?!? It tastes as good as it looks and has the most wonderful smokey flavor.  I REALLLLY wish I had had time to whip up some cornbread or even some fresh rolls to sop this up with but crackers it was.  I totally promise to start sharing non-corn-chowder soups next.  Promise.

**Don’t forget to link up your recipes, crafts, and DIYs to On Display Thursday this week—>>>here!